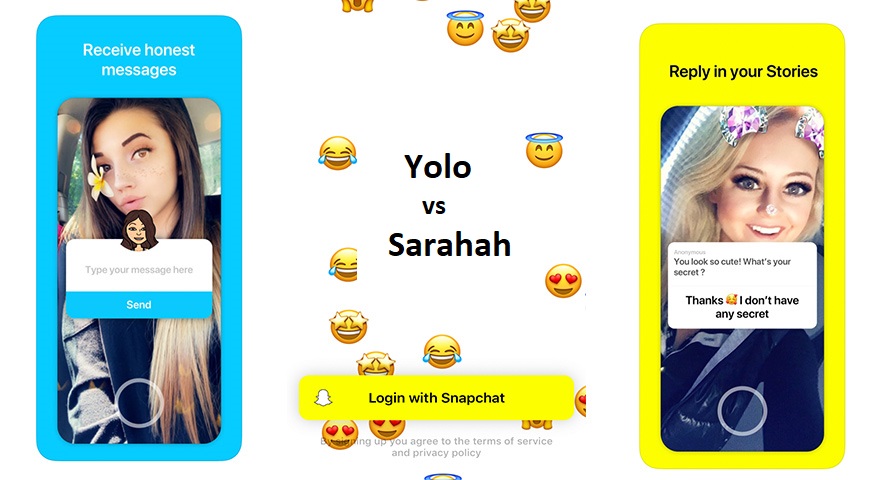 Yolo – which stands for ‘you only live once’ – is one of the first apps built by Snap Kit. This Yolo app is developed by Gregoire Henrion. Who is the co-founder of Popshow,inc. Snap Kit is a tool which was launched by Snapchat last year as a way for smaller companies and developers to get involved within its social network. Yolo uses the Snapchat app by letting people post a story inviting others to “send me anonymous messages”. The post can be sent to Snapchat users in a person’s friends list or can be shared to the wider public. The person who sees the request can also send an anonymous message on Yolo itself. So this app trending #1 position in May 2019. If you want to Do Anonymous Question on Snapchat then click Here.

Sarahah is a social networking service for providing constructive feedback. Sarahah is Arabic word Which means “frankness” or “honesty”. This app is developed by Zain-Alabdin Tawfiq at the end of 2016 and reached a sudden worldwide success by mid-2017. This app is a success with the help of Snapchat update that allowed people to share URLs on their snaps. Sarahah allows people to text messages to others and the person reading that could then reply anonymously. This app is very helpful in Company Initially, it was meant for workers to compliment their bosses. How to Use Yolo on Pc.

It was released on June 13, 2017, on US App Store and also Released in several other countries including Canada, India, and Lebanon. On July 5 An update was released by Snapchat. Due to this update Within two weeks, it was at the number 1 position. The rise was also seen in a Google Trends report. This app was down because on social media news was viral that Sarahah is revealing the name of the user who sends anonymous messages to their friends boss etc. Yolo Alternatives App.

Yolo vs Sarahah : Which is Good?